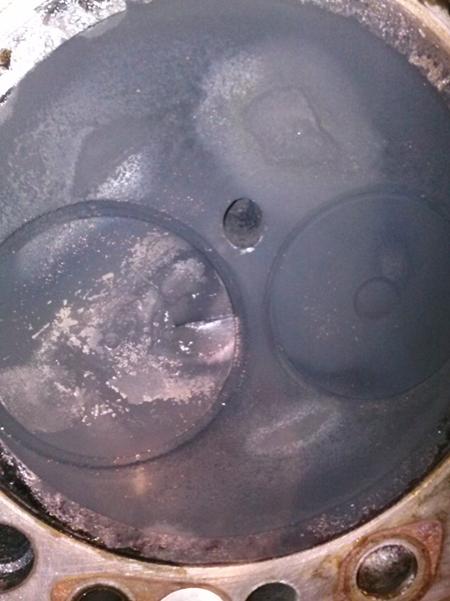 Above we see pistons destroyed by dropped valves and excessive cylinder temperatures.  The top left shows a piston that has pieces of valve and valve seat imbedded in it. The next two pistons have swelled due to heat causing them to contact the liners.  The bottom right hand picture shows a piston that has actually started to melt down due to the excessive cylinder temperature caused by a loss of cylinder pressure. 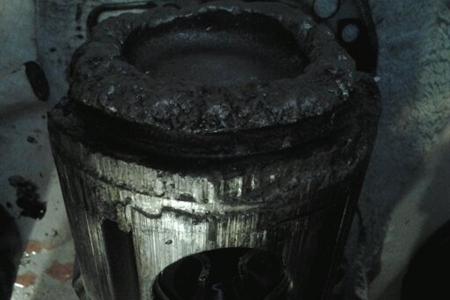 In the pictures above, we see valves that have been removed from their heads.  They started out with small cracks like in the first two pictures of this section and then quickly progressed to this more advanced stage. 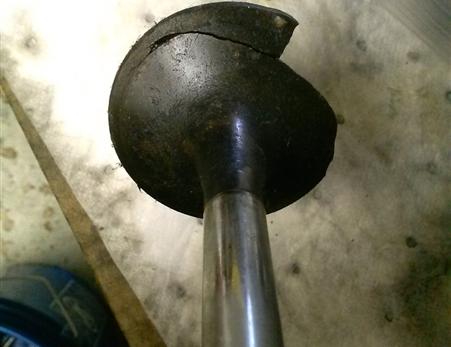 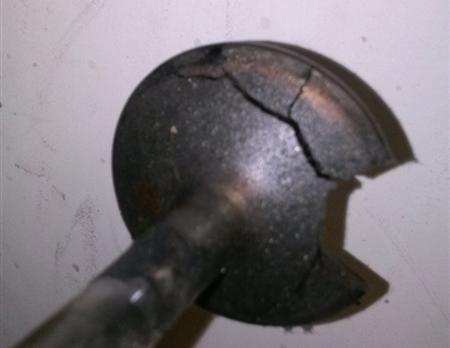 In the pictures above we can see the early stages of a cracking valve.  This valve was found on an engine that had another intake valve failure on a separate head. 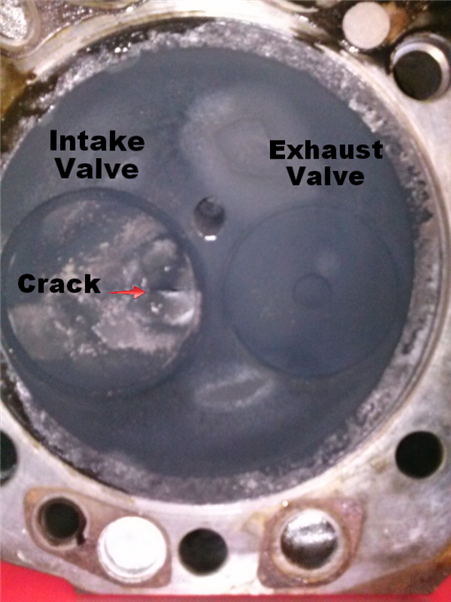 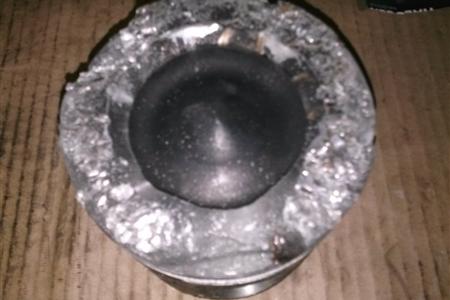 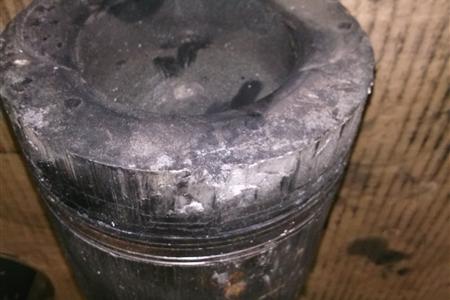 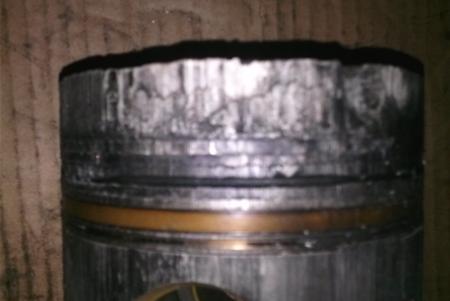 Over the years, it has been observed that no make or model of marine diesel engine is without its own weaknesses and idiosyncrasies.  With that being said, the makes and models of the engines being referred to in this section have not been publicly listed.

Located in the cylinder head(s), the valves of an engine perform the function of allowing fresh incoming air in and spent exhaust gases out of the cylinders.  The opening and closing of the valves is controlled by the camshaft via the tappets, pushrods, & rockers.  While the valves are closed, they are sealed against their seats which allows the cylinder to hold pressure.

On certain specific makes/models of mechanical engines, the intake valves have been found to be a  common failure point around 3000 hours.  Up until the introduction of the “common rail” engine, these marine engines were designed with a 2 valve cylinder head.  A two valve head consists of one intake valve and one exhaust valve per cylinder (common rail engines have two of each).

This 2-valve design served quite well, for a long time, on many different models, however once the power levels had been increased to a certain point, the higher cylinder pressures began to take their toll on the valves, specifically the intake valves.  Due to the larger surface area of the intake valve, the distance of the valve edge from the stem is too great and the edge is not strong enough.  The exhaust valve has a smaller surface area and therefore does not suffer from the same problem.

In the higher horsepower models, the intake valve begins to fatigue under the constant pressure fluctuations in the cylinder.  Over many hours of operation, the edge of the valve will form a small crack.  The size of the crack will increase as the cylinder pressure begins to escape through the crack.  As the crack extends and widens, the valve becomes more fatigued and eventually a piece of valve will crack off and fall into the cylinder.  This is what is commonly referred to as “dropping a valve.”

Once a broken valve piece falls into the cylinder, a chain of events begins to occur.  First, the valve pieces are smashed between the piston and the head, damaging both.  Now that the valve is no longer in place to seal against its seat, the cylinder pressure is much too low and the fuel is not being properly burned causing the cylinder temperature to go up dramatically.  The aluminum piston begins to melt down and break apart.  Pieces of piston and valve are now pushed up through the void in the intake valve and they enter the intake manifold runner.  The pieces are then fed to the adjacent cylinders creating a cascade effect in all the cylinders that share that intake runner.  At the same time, other pieces of piston and valve are pushed past the exhaust valve, and then enter into the exhaust manifold.  They flow out the manifold and go through the turbo, destroying it on their way out of the engine.

Most commonly, after a valve failure, an engine will need at least one new head (likely more), one new turbo, and usually one bank of pistons/cylinder liners (4,5,or 6 depending on the number of cylinders on the bank).  Also, the engine may require a new rod, new oil cooler elements, and new oil pump pressure relief valves depending on how long the unit was run before the failure was discovered.  The longer the engine is run after the failure, the more extensive the damage that will occur.  Even after the damaged bank of cylinders have been repaired, the question of reliability still hangs over the remaining heads with original valves on both engines.  A valve failure on one head is an extremely strong indication that the other intake valves are not far behind.

Many customers who have experienced a failure, choose to have all the valves on both engines replaced at this time.  Some other customers, once they are made aware that they are within the usual range of hours for failure, choose to replace all the valves on their engines before a failure occurs at all.  During this service, all the heads are removed from both engines, they are disassembled, inspected, fitted with new intake/exhaust valves and reinstalled.  The advantage of this service is that there is significantly less parts and labor expense involved than with a valve failure.