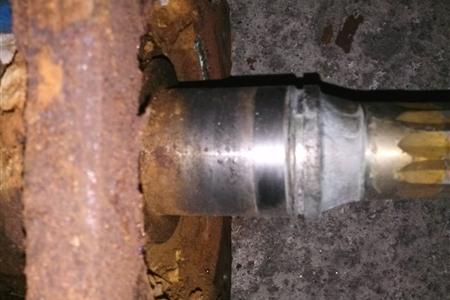 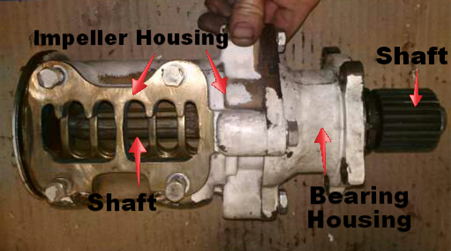 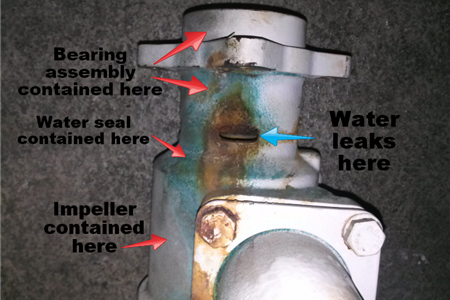 The pump functions by rotating an impeller inside of a housing via an engine driven shaft.  The vanes of the rotating impeller ride up and over a wedge like device called the cam.  Each time the vanes of the impeller ride over the cam, they are compressed against the body of the impeller and the water trapped between the vanes is pushed out the discharge side of the pump.  When the vanes continue to the other side of the cam, they stand back up, creating a low pressure zone, and subsequently draw water in from the inlet side of the pump.  The water stays trapped between the vanes until they rotate around to the other side of the housing and are compressed against the cam again.

When the oil seal begins to leak, usually only a small amount of oil will drip out at first.  Depending on the location of the pump, this small amount of leakage is easily missed by the casual observer.  However, once the seal begins to leak it is only a matter of time before the shaft becomes damaged by the failed seal.  A new seal won’t be able to work with a damaged shaft and the shaft will need to be replaced.  A replacement shaft significantly increases the cost of a raw water pump rebuild.  The oil leak will get worse over time, but because it isn’t a pressurized unit, the leak generally only exists as a nuisance.  Eventually though, the leak will get bad enough that it can no longer be ignored.  By this time, of course, the shaft will be damaged and will need to be replaced.

When the water seal begins to leak, it is usually more difficult to spot.  Most of the time, the leak is small and the only evidence is a bit of rust on the pump housing.  Just like with the oil seal, a leaking water seal will eventually damage the shaft, significantly increasing the cost of a pump rebuild.  The difference with the water seal leak is that, when it is unnoticed, or ignored long enough, it can destroy the shaft, and/or shaft bearings, causing a pump failure.  Once the pump fails, seawater stops flowing and all the seawater cooled components will get hot.  At this point, the engine will need to be shut down before it overheats, or burns the fiberglass exhaust.  If the pump fails while the boat is under a load and at speed, the intake air temperatures will go up (aftercooler not cooling), putting the internal engine components at risk.  It will also leave a water cooled propeller shaft seal assembly with no cooling water, quickly destroying it, which leads to a major seawater leak at the shaft, requiring immediate emergency haul-out and repair.

The picture on the top left is of a MAN raw water pump that has been removed from the engine.  The other three pictures are of different shaft/bearing assembles from disassembled pumps.  The damage caused to the bearing housings by leaking raw water seals is obvious.  With this level of corrosion, the shaft and bearing assembly will likely have to be replaced.  Although it is somewhat difficult to see, the picture on the bottom right shows shaft pitting due to corrosion, which can interfere with the seal function, rendering the shaft useless.  This can occur long before the water leak has caused the housing to be so obviously corroded.

Above on the left we see a Cummins "B" raw water pump still installed on the engine.  The picture on the right is of the same style pump housing removed from the engine and disassebled.  These pumps are very likely to experience bearing damage once they begin leaking because the bearings are self contained and not protected by an oil seal. 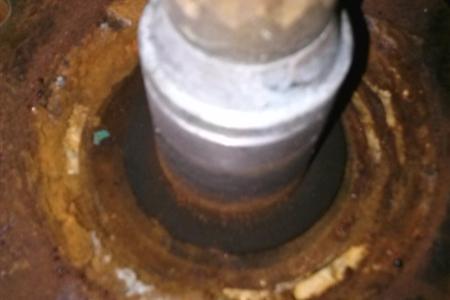 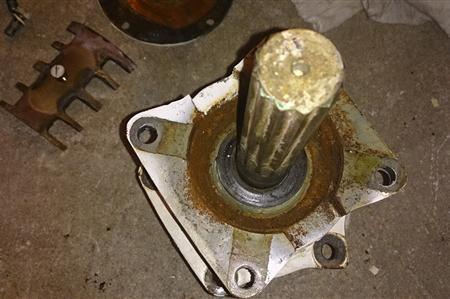 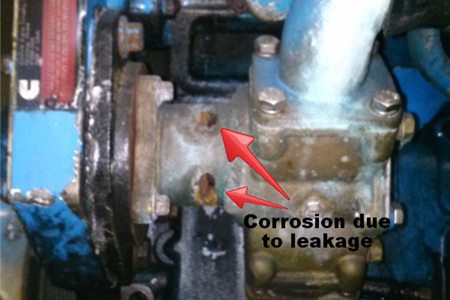