In these pictures we see the back side of the oil cooler housing after the housing has been removed from the engine.  This gasket surface is where the housing meets the block.  The two large holes toward the top of the picture are where all of the oil being pumped through the engine goes in and out of the housing.  The gasket breaks away in the corner of the hole on the left, leaving a relatively large gap where the oil can escape.

In the above pictures, we see an oil cooler assembly still installed on the engine.  If this unit were leaking, the leak would originate where the cooler meets the block (near the upper left arrow) and drip down the block and the back of the oil cooler housing.  The oil will usually be dripping off of the bottom rear oil cooler cover bolt (lower right arrow). 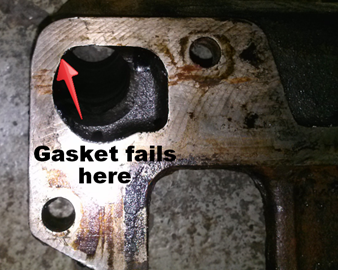 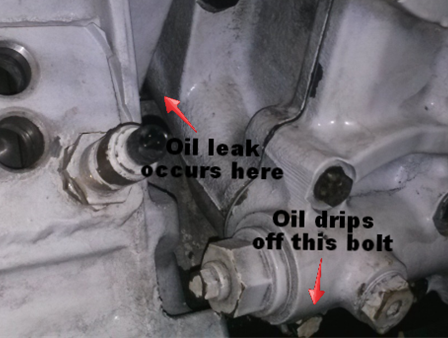 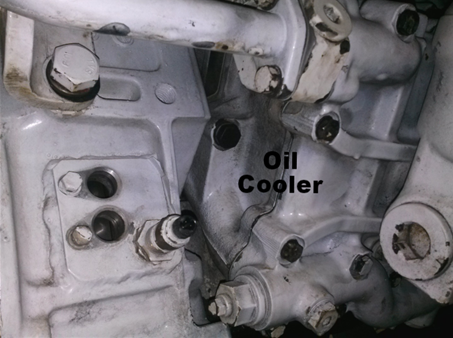 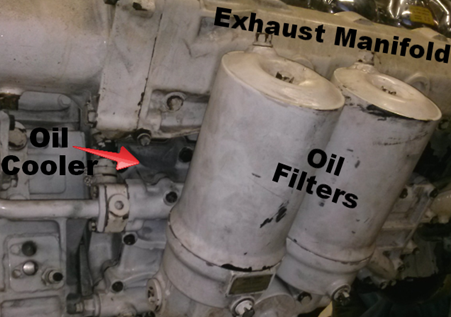 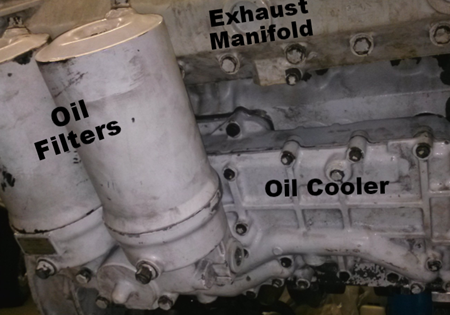 The oil cooler, as the name implies, is a unit designed to cool the engine’s lubricating oil.  It does this by passing the oil coming from the oil pump through an element that is submerged in a coolant passage.  The heat from the engine oil is transferred to the coolant by conduction through the element.  The heat is then carried to the heat exchanger element where it is transferred to the seawater system (see the heat exchanger portion of the tech section for further explanation).  On a MAN, the oil cooler is located at the rear of the engine on the right bank side below the exhaust manifold and is mounted to the engine block.

MAN engines are excellent units with a proven track record of performance and reliability.  Of course, all engines have their special issues to pay attention to.  For the MAN engine, one such issue is the oil cooler.  Although it is not a regular maintenance item, due to the previous failures observed and the potential ramifications of a failure, the oil cooler is definitely an item to keep an eye on.

In almost all cases, before a failure occurs, there will be an observable leak. The portion of the MAN oil cooler to inspect is at the rear of the oil cooler itself.  The leak will occur where the oil cooler housing bolts to the block in the lower left hand corner of the oil cooler housing.  The oil will leak down the side of the engine block and down the back side of the oil cooler housing and drip off the lowest point on the oil cooler cover.  If there is a leak present, a gasket failure will occur at some point in the future.  In the event of a gasket failure, the corner of the gasket breaks away, leaving a gap, through which, the oil rapidly leaks out of.  Once the failure occurs, the engine will empty itself in a matter of minutes (or even less).  The problem goes unnoticed during this very short time and the only indication that the operator will see is the low oil pressure alarm that sounds once the oil system is nearly empty.

The good news is that when repairing a leaking oil cooler, it can be done in such a way that future oil cooler leaks and failures will likely never be a concern again.