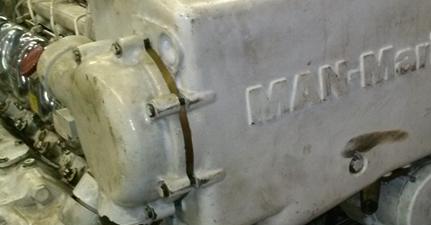 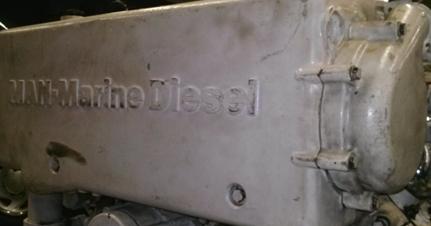 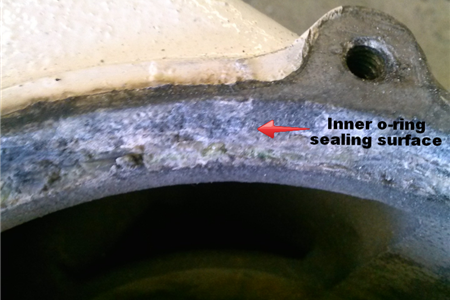 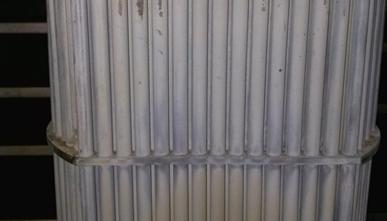 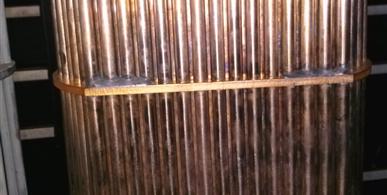 From this angle you can  see where the inner and outer o-ring seals sit on the element.  As you can see from the two pictures above this one, the inner o-ring will not be able to seal against this irregular, dented surface.

Unfortunately, heat exchanger damage is quite common.  It is also totally preventable through regular inspection of the element and timely replacement/treatment of the heat exchanger o-rings.  A basic o-ring replacement can easily be completed with minimal parts in less than a day (assuming the elements do not require cleaning).  Tank and bundle replacement on two engines will likely take over two days, (with the potential for weeks of down time, waiting for parts) and cost over $25,000 in parts alone. 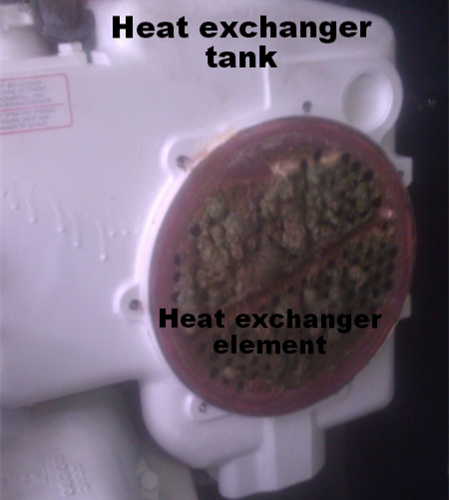 The picture above is of the right bank side of the heat exchanger.  The end cap has been removed and the element is still in place.  We can see how extensive the seawater growth is on the element.  Due to the efficiency of the heat exchanger, the coolant temps may not be elevated above the alarm threshold, even with this level of growth, but this much scaling presents a restriction in the seawater system.  The restriction will create excess back pressure and can damage the water seal in the raw water pump.

This side of the heat exchanger is of a slightly different design than the left bank side and is not as vulnerable to corrosion, but if left unserviced, this side of the tank can be damaged as well, which will further add to the repair costs.

The picture above on the left is of the left bank end cap after removal.  The white substance is corroded aluminum.  The black strip is the outer o-ring, which is where the seawater weeps past.  The pictures on the right have been included to illustrate what happens to o-rings over time.  These two are made of the same material as the inner and outer heat exchanger o-rings.  The o-ring on the left is new, the one on the right is used.  Although the difference is subtle, you can clearly see that the used o-ring has flattened out and is no longer elastic.  When this occurs to any o-ring, it will leak.  When it happens to a heat exchanger o-ring, the corrosion process begins. 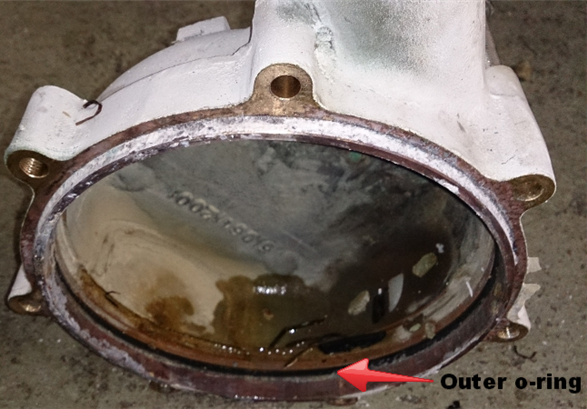 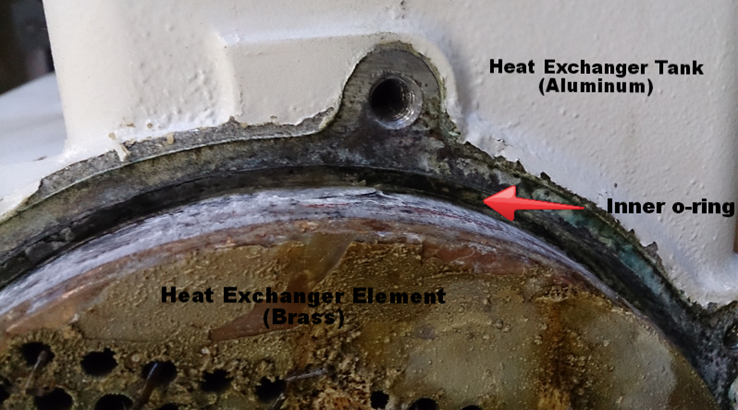 The bolts have been removed, but the cap has not been disturbed yet.  This tank has externally visible corrosion (arrow), which means that the tank will almost definitely be damaged.  However, the element (the most expensive piece of the assembly) may still be serviceable if action is taken soon.  The condition of the element can not be determined without being completely removed. 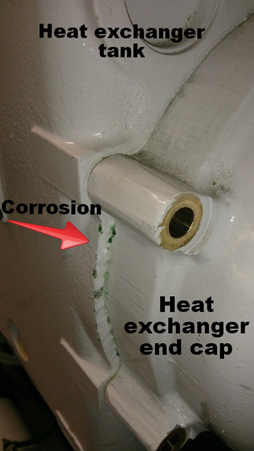 In the above pictures, the elements have been removed and we are looking at the tanks.  In the two upper pictures and the lower left picture, we can see that the inner o-ring sealing surfaces, of the heat exchanger tanks, have been compromised due to corrosion.  On each of these tanks, this surface was originally smooth, and it will have to be smooth again in order for the new o-ring to be able to seal.  Replacement tanks are nearly as expensive as the elements, but the tank can be repaired, with machine work, if the corrosion is not too severe.  The bottom right hand picture is of a repaired tank.  Note the smooth surface. 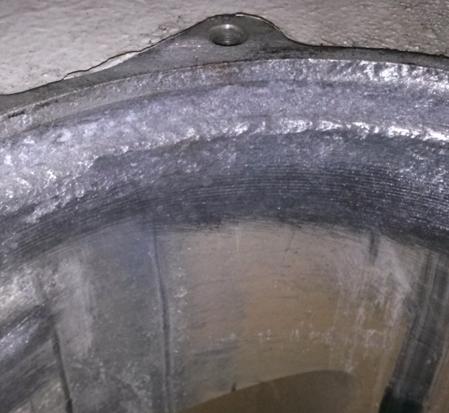 Heat exchanger maintenance is often misunderstood to be limited to the cleaning of the seawater portion of the heat exchanger element.  Although that is partially the goal of this service, it is only one portion.  Equally important is the removal of the buildup of deposits on the coolant side of the element.  This can only be performed by removing the element from the engine entirely.  During the heat exchanger maintenance, the element is removed from the engine and cleaned ultrasonically at a radiator shop.

Additionally, on heat exchangers using a removable element design, it is imperative to remove, replace, and treat the o-rings that seal the element in the tank.  With the exception of the "V-new" MAN engines, all MAN and common rail Cummins "C" heat exchangers employ this design.  These heat exchanger designs are comprised of dissimilar metals - usually an aluminum tank and some type of brass element.  Because of this, they are vulnerable to galvanic corrosion whenever there is moisture (especially seawater) present between them.

For this article we will discuss the effects of the corrosion on a MAN heat exchanger.  Although there are design differences, this process is essentially the same on other dissimilar metal designs.

Over time, the o-rings that seal the element in the tank become hard, and lose their ability to seal.  When this occurs, a small amount of seawater will weep past the outer o-ring and then lie between the tank and element next to the inner o-ring.  Once this happens, corrosion begins to occur at the aluminum tank.  The corrosion causes pitting of the inner o-ring sealing surface, and over time, renders it unusable.  As the tank continues to corrode, the aluminum oxidizes and expands putting excessive pressure on the o-ring and subsequently on the sealing surface of the element, eventually crushing and rendering the element unusable as well.

Replacement tanks and elements, for two engines, can cost in the 10s of thousands of dollars.  The process occurs slowly, but surely, and it occurs regardless of the running hours, or the amount of use that the engines see.  A service on this type of heat exchanger should be performed based on time interval since last service, not on hours of operation.  See the following pictures for different examples of what the results of this process look like. 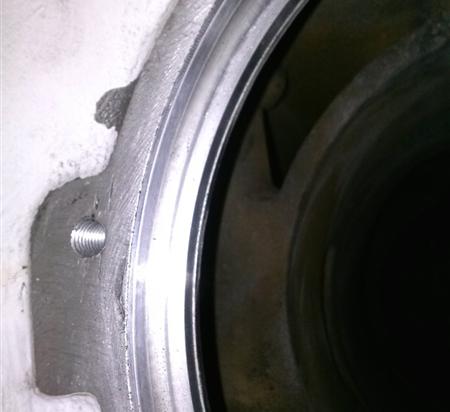 Here we can see the difference between a dirty element and a clean one (seawater side).

The picture above is of the main components of the heat exchanger assembly.  On top in the middle is the heat exchanger tank, below is the element (or bundle), and on the sides are the end caps.  The cap on the left side of the picture is the right bank end cap and the cap on the right side of the picture is the left bank end cap.  Left and right are reversed because we are facing the components as they would be on the engine. When assembled, the element slides into the tank, and the end caps bolt to the tank.  O-rings seal the element at the tank and the end caps.. 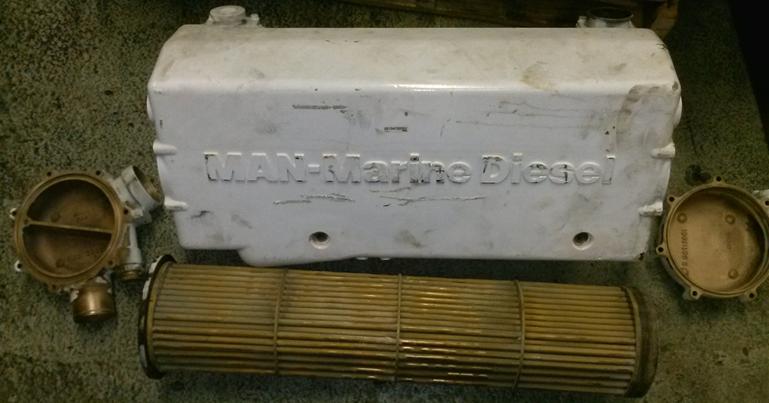 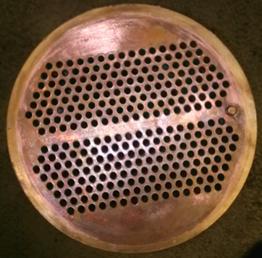 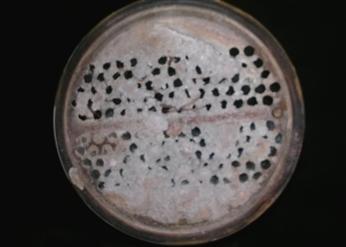 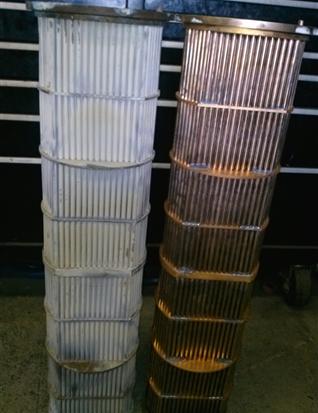 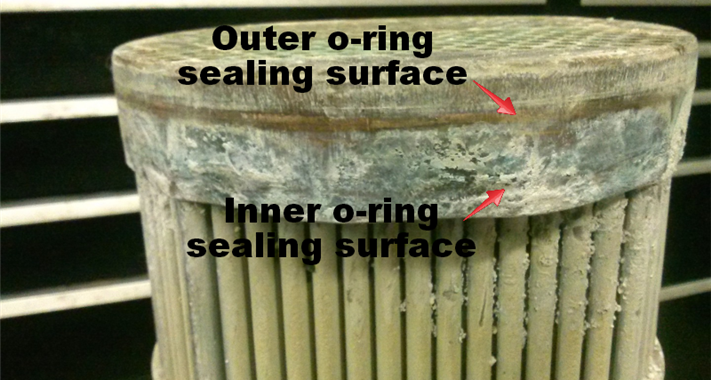 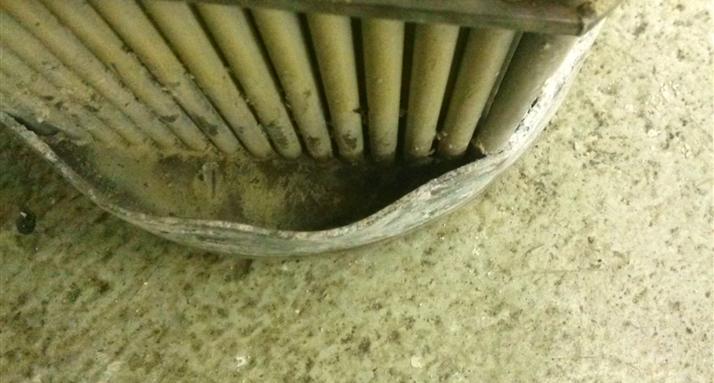 In the above pictures, you can see the difference between a dirty element and a clean one (coolant side).  The buildup, seen on the outside of the tubes where the coolant flows, insulates them and keeps the heat from transferring to the seawater that is flowing through the middle of each tube.  The only way to effectively clean this portion of the element, is to remove it entirely from the tank.  Flushing the seawater system does nothing to remove this buildup.

The pictures above and below are of the damaged inner o-ring sealing surface of the heat exchanger element.  This edge should be perfectly round, but is clearly crushed.  Once the element is crushed like this, there is no option for repair, a new element will be needed.