The freshwater pump (or coolant pump) is responsible for circulating coolant through the engine.  Most freshwater pumps consist of a housing and a solid impeller pressed  onto a drive shaft.  A seal on the shaft keeps the coolant inside the pump housing.  Depending on the pump design, the shaft will be connected to either a pulley (driven by a belt) or a gear (driven by the gear train of the engine).  As the shaft is turned, the impeller spins inside the housing, accelerating the coolant radially away from its center and against the outer wall of the housing.  This creates a pressure differential between the inlet and outlet of the housing, thereby inducing coolant flow through the engine.

Once the coolant exits the outlet of the pump, it travels throughout the engine’s freshwater system.  As the coolant comes into contact with the hot engine parts, the heat is transferred to the coolant.  The coolant travels to the heat exchanger where it contacts the cool seawater tubes and the heat is then conducted through the tubes into the seawater.  The now cooled coolant is sent back to the inlet of the freshwater pump where it starts the process over again.

Usually the larger engines, such as the QSM 11 Cummins and all the MAN engines, employ a rebuild-able pump design.  Whereas smaller engines, like most generators, as well as the Cummins “B” and “C”, have a non-serviceable freshwater pump that is replaced entirely once it fails.  The rebuild-able designs are much more cost effective to rebuild than replace.

On a gear driven freshwater pump, a leaking water seal is a concern because it can allow coolant into the gear train, contaminating the engine oil.

On a belt driven freshwater pump, the reason a leaking water seal is a concern, aside from losing coolant, is because once the coolant leaks past the seal, it will come into contact with the shaft bearing.  On a belt driven coolant pump, the bearing is a self contained unit.  When coolant contacts the bearing it will compromise the lubrication inside the bearing and dramatically shorten the bearing life.  Once the bearing begins to fail, the shaft will deflect slightly, allowing the impeller to contact the pump housing, which damages the impeller and the housing.  This can make the rebuild more expensive, by needing more replacement parts, or it can cause the need for an entire replacement pump.  Depending on the engine, this can significantly raise the cost of repair.  Additionally, if a freshwater pump leak is left unaddressed long enough, the bearing will fail completely and the pump will seize.  The drive belt will break and the engine will overheat.

Servicing of the freshwater pump is not part of a scheduled maintenance, however any pump with a water seal will leak at some point in its service life.  Whether it takes a couple of years, or many years, it will happen eventually.  Of course, it does not make sense to rebuild a pump that does not show any signs of leakage, but it is prudent to inspect the pump periodically to verify it is not leaking.  This way, when a leak is observed, it can be addressed right away before any, more serious, issues occur.

On the left we see a MAN freshwater pump removed from the engine.  On the right we see a closeup of a badly leaking pump that is still installed on an engine.  The coolant leaks out of a small weep hole, in the pump housing, located behind the drive pulley, indicating that the water seal has failed. 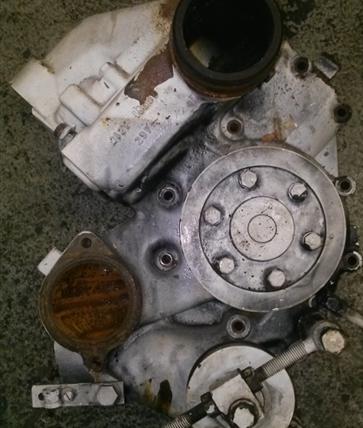 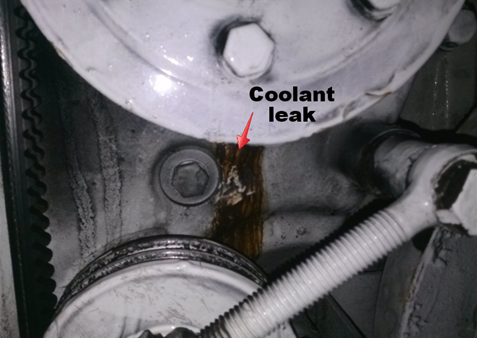