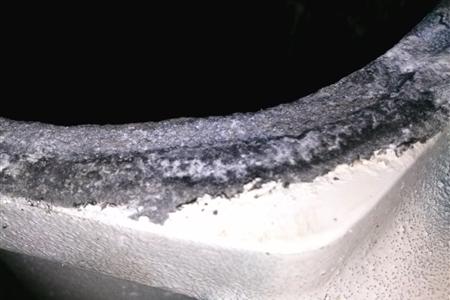 The picture above is of the seawater side of the MAN aftercooler.  The holes you see are the insides of the tubes that are visible in the picture directly above this one.

In the picture above, we see the entire front side of the MAN aftercooler.  The seawater flows from left to right inside the horozontal tubes running through the element.  The intake air flows from front to back around the outsides of the tubes. 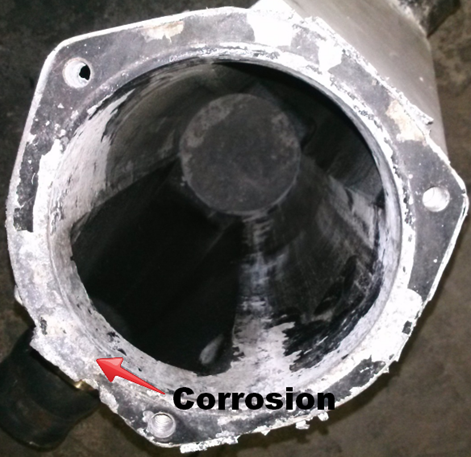 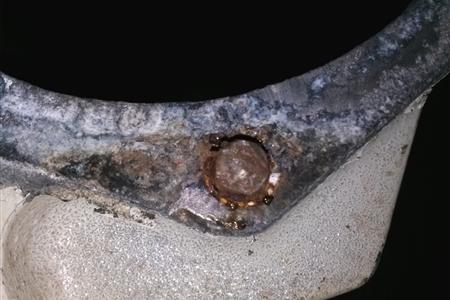 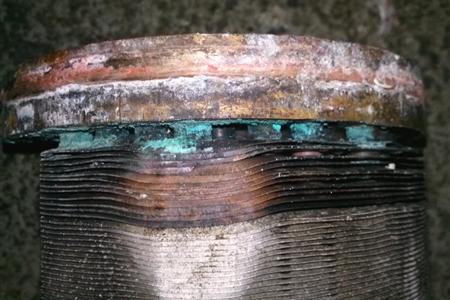 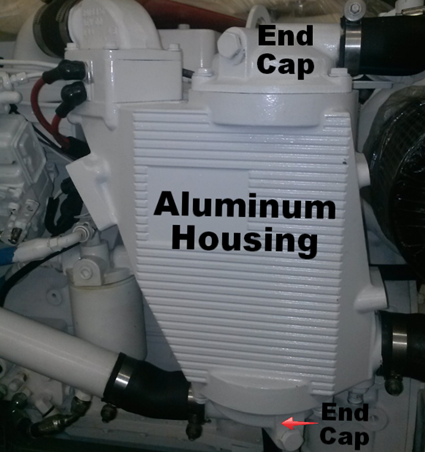 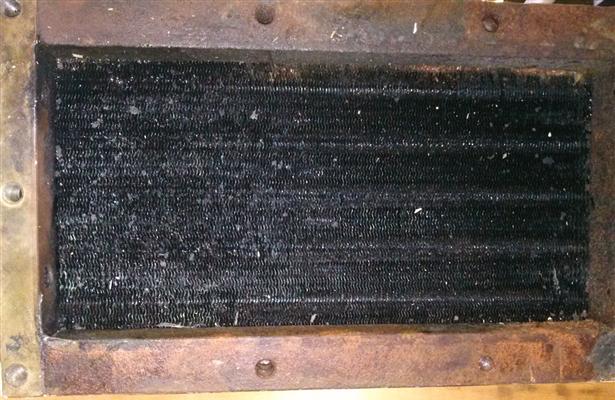 Top left is a closeup of the corrosion at the end of the aftercooler housing.  Top right is the end of the element that has been dented from the expanding corrosion of the housing.  Bottom left we see that the seawater was actually seeping past the o-ring into the air side of the housing, which means that seawater was getting into the intake system and subsequently into the cylinders.  Bottom right is a closeup of the damage to the element.

Corroded bolts that are stuck in place and break off, like the one seen here, are not uncommon on aftercoolers that have not been serviced.  Having to drill and machine due to broken bolts adds to the time and expense of the job.  This can happen on any make/model and is certainly not limited to aftercoolers.  Any unit with seawater flowing through it can suffer from broken bolts. 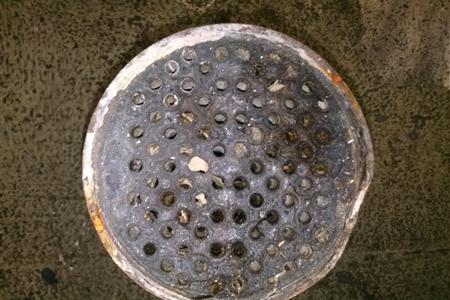 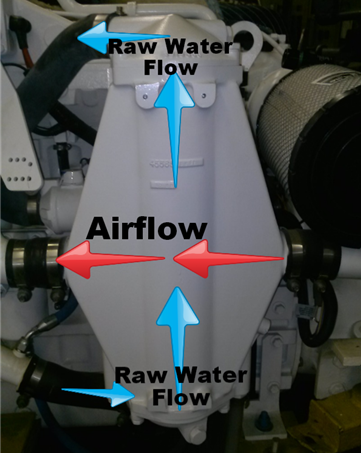 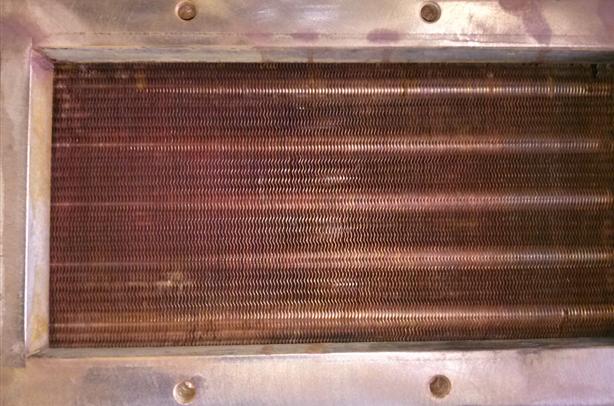 Above is a picture of the main components of a disassembled "B" series aftercooler that has been damaged due to corrosion.  The pictures below are closeups of this same unit. 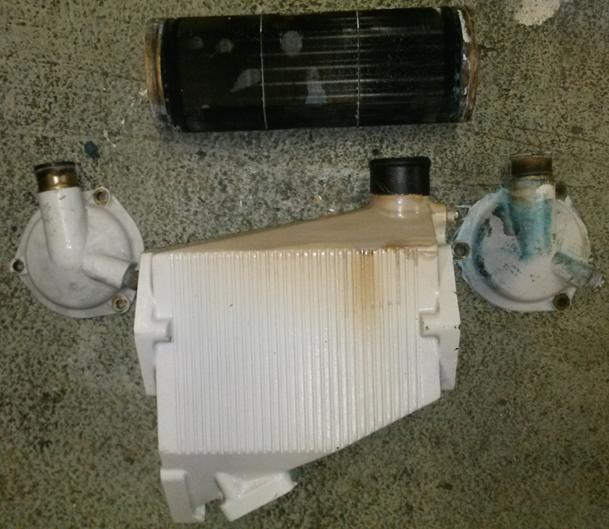 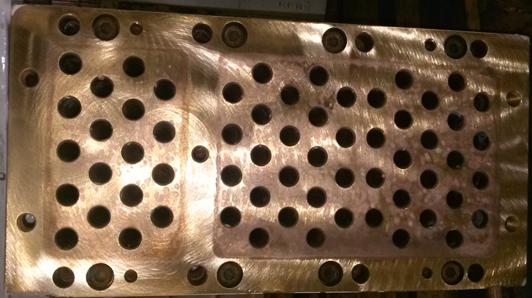 In the pictures above and below, we see the air side of a MAN aftercooler before and after cleaning.  These are closeups of only one half of the cooler. 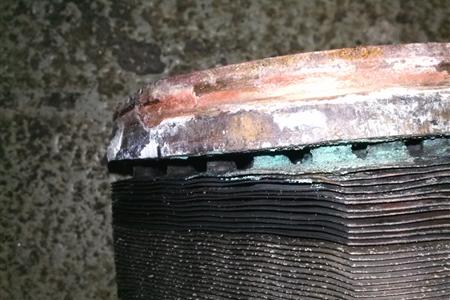 The two pictures above are of Cummins aftercoolers.  The one on the left is a "B" series, and the one on the right is a "C" series.  There are numerous different models of the "B" and "C" engines including both mechanical and common rail designs.  However, they all employ essentially the same general style of aftercooler design, using an aluminum housing, with a removable element, and two end caps.  The element is sealed at the end caps by o-rings.  These units are vulnerable to galvanic corrosion if left unserviced, so the o-ring replacement is very important.

The function of the aftercooler (also referred to as intercooler) is to cool the intake air (or charge air) that has been heated by the turbocharger during pressurization.  The charge air exits the turbo and is highly pressurized causing temperatures in excess of 300 degrees.  This is why you may notice that the turbos and the pipes going to the aftercooler have a darker color than the rest of the engine - the paint has actually been burned.  After pressurization, the highly heated charge air is then routed through the aftercooler.

The aftercooler is an element with tubes running through the inside.  Through the center of each tube, flows seawater.  The charge air flows over the outsides of the tubes on its way to the intake runner(s).  On the air side of the tubes, there are thin, tightly spaced, cooling fins that are fixed perpendicularly to the tubes.  These fins provide a greater surface area to aid in the transfer of heat from the charge air to the seawater tubes (just like the fins of an automobile radiator).

Like the heat exchanger service, the aftercooler service consists of more than just cleaning the seawater portion of the element.  The air side of the element becomes dirty due to oily crankcase vapors, that are re-circulated through the air intake, creating a sticky build up between the fins of the element as well as on the tubes themselves.

This phenomenon has been observed in actual cases where heavy amounts of contaminants were going through the intake and created such an insulating barrier on the aftercooler element, that the engine actually had a cylinder failure due to excessive cylinder temperature.  Although external contaminants were involved, this scenario illustrated an accelerated and severe version of a process which occurs in all normally functioning engines and proves the importance of a properly performing aftercooler.

Also, just like the removable element heat exchanger designs referred to in the heat exchanger section, aftercoolers using a removable element design are susceptible to galvanic corrosion.  Therefore, those models require periodic o-ring replacement, or tank/element damage will occur.  Examples of engines employing this type of aftercooler design include most mechanical and all common rail Cummins "B" and "C" models.

The aftercooler maintenance consists of removing the unit from the engine, disassembling it, and having the element ultrasonically cleaned at a radiator shop.  Additionally, many aftercooler designs seem to be vulnerable to small amounts of seawater seepage causing corrosion of the end plate bolts.  This corrosion can lead to the bolts becoming seized/rusted in place, which leads to broken bolts requiring time consuming machining to repair.  During the aftercooler service, all of the bolts can be removed, inspected, and coated with an anti-seize lubricant to prevent problems between services.